The UK has a long history of awarding both its citizens and military personnel with medals affixed to ribbons to show recognition for brave acts.

There have been many distinctions made throughout the history of Britain with some such as the Sea Gallantry Medal dating back to the early 1800s. Most medal decorations from the 1800s have since then been replaced with newer decorations that cover multiple areas although there are still some existing medals from this time period.

Military personal who show brave acts of gallantry outside of the enemy threat or military command are also able to receive the George’s Cross although they are rarely awarded to military personal.

The third highest decoration is the George Medal given to civilians and soldiers outside of enemy danger who show lower, but still admirable acts of courage but this is hardly ever given any more given its extremely loose definition.

There are also many other decorations, medals, and crosses which are awarded to all types of people which generally have to do with dedication to the armed services or for a notable act of bravery such as the Royal Red Cross medal for military nurses or the Sea Gallantry Award for those who save a life on British seas.

Additionally, there are medals that were given to those who helped forward the British interests in India while it was a colony but since the Indian Independence was granted in 1947 those are now obsolete.

Almost every medal of distinction has encountered a change in definition since its inception with the two most common changes occurring in the 1970′s when many decorations were opened up to posthumous recipients and in 1993 when may decorations were offered to military officers regardless of rank distinction.

Every medal hangs on a ribbon which is carefully designed to symbolize each award separately thus making the ribbon as much of a collector’s item and a symbol of importance as the medal itself.

We have compiled a reference library for British military medals and their campaigns. Se the box below for more

Click on a date range to narrow your search 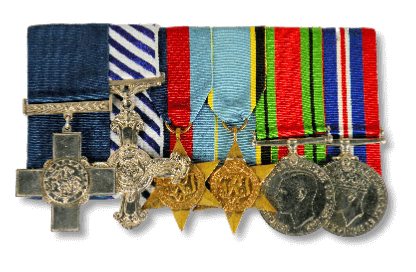